Casey Hayward will stay in the AFC West. The former Chargers Pro Bowler intends to sign with the Raiders, veteran NFL reporter Josina Anderson tweets. It’s a one-year deal worth up to $4MM, Anderson adds (on Twitter). 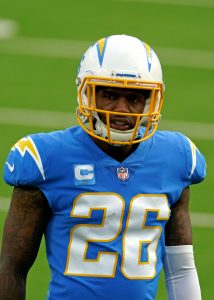 The Bolts cut Hayward this offseason, ending a five-year tenure. The veteran cornerback will link up with former Chargers defensive coordinator Gus Bradley, whom the Raiders hired this offseason. Hayward met with Raiders coaches Tuesday, Anderson adds (via Twitter). He will also reunite with secondary coach Ron Milus, whom the Raiders brought over with Bradley. Milus was the Chargers’ DBs coach throughout Hayward’s tenure.

Corner has resided as a perennial Raiders need, and they have extensive experience going against Hayward to judge his credentials. Experience in Bradley’s system will benefit the nine-year veteran as well. This move, however, likely will send Richard Sherman elsewhere. The former All-Pro spoke with the Raiders about a deal this offseason, but Hayward’s impending Las Vegas stay likely will point Sherman to another team.

Hayward, 32 in September, operated as one of the league’s better corners for a while. He signed what turned out to be a bargain deal for the Chargers in 2016, coming over from the Packers, and made the Pro Bowl that season and under Bradley in 2017. Hayward intercepted 11 passes between the 2016-17 seasons. This led the Bolts to reward him with a $12MM-per-year extension. While 2020 can be classified as a down year for Hayward, he is not far removed from elite work. Pro Football Focus graded the former second-round pick as a top-five corner in 2019.

Las Vegas drafted a corner this year — Nate Hobbs — but not until the fifth round. The team still has highly drafted cogs Damon Arnette and Trayvon Mullen; Hayward will provide veteran support for these young defenders. Arnette missed much of last season due to injury.