The Jets and offensive tackle Morgan Moses are making progress on a multi-year deal, according to a source who spoke with ESPN.com’s Jeremy Fowler (on Twitter). Other teams have been in the mix, but it sounds like the Jets are the frontrunners for the seven-year vet. 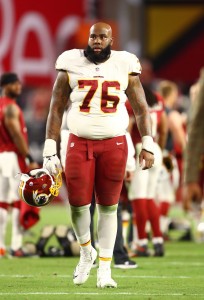 Moses went six straight seasons without missing a game for the Washington Football Team and earned a lucrative re-up in 2017. However, Washington opted to revamp their tackle group this year by drafting Samuel Cosmi in the second round and signing longtime Bears left tackle Charles Leno.

Last year, Pro Football Focus graded Moses as a top-20 tackle. However, the advanced metrics framed him as a middle-of-the-road tackle from 2017 through 2019. For the Jets, he’d be a solid choice for their right tackle job, where George Fant and Chuma Edoga are currently duking it out to start opposite of Mekhi Becton.

Meanwhile, they have the dollars available to add Moses after convincing wide receiver Jamison Crowder to take a pay cut. Originally set to make $10MM this year, it’s believed that Crowder will earn something in the neighborhood of $5MM.