The Lions have another draft pick in the fold. On Thursday, they formally signed second-round defensive lineman Levi Onwuzurike. 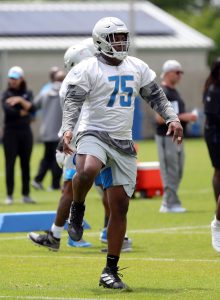 Onwuzurike, a Washington product, opted out of the 2020 season and spent the year preparing for the 2021 NFL Draft. The 6-foot-3, 288-pound lineman earned first-team All-Pac-12 honors in 2019, and finished his Huskies career with 95 tackles and seven sacks.

The 6’3″, 293-pound lineman played defensive tackle with the Huskies. However, he’ll be slotted in as a defensive end that moves inside on clear passing downs, according to defensive line coach Todd Wash. As the No. 41 overall pick, Onwuzurike will earn $8.14MM across four years, including a signing bonus of $3.2MM.

With Onwuzurike signed, the Lions have just a couple of draft picks to go. Here’s the full rundown of their 2021 draft class: