2018 third-rounder Jerome Baker has quietly turned himself into a solid starting linebacker for the Dolphins. He has averaged 119 tackles over the past two seasons, and he even displayed some real pass-rushing chops in 2020, compiling seven sacks. 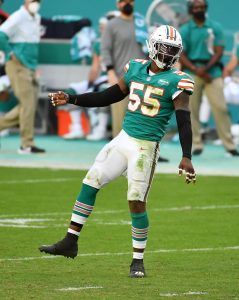 The Ohio State product is entering the final year of his rookie deal, but it doesn’t sound as if there have been any substantive contract talks between player and team at this point. When asked if the Dolphins had approached him about a long-term accord, Baker said, “I guess? We haven’t really talked about anything. We’re just going into this year” (via Adam H. Beasley of the Miami Herald).

Baker is due to earn $2.433MM in 2021, though he would surely love a multi-year deal with an eight-figure average annual value. His new running mate at inside linebacker, Benardrick McKinney, has a $10MM AAV — which positions him just outside the top-10 for ILBs — and given Baker’s performance to date and potential for further growth, that seems like a fair starting point in negotiations.

Still, Baker understands that there are things he can work on. Pro Football Focus’ advanced metrics painted him as a fairly average defender in 2020, and he received a subpar 47.4 mark in run defense. As Beasley points out, Baker missed 10 tackles last season, though those deficiencies were largely counterbalanced by his improvements in coverage and the pass rush.

“I definitely look myself in the mirror and know what I need to do to get better,” Baker said. “For me, locking in on the run game, being one of those linebackers that secures the inside, not just in the pass game but in the run game.”

He added that he would be perfectly content to continue his career in South Beach. “I want to play here the rest of my career. I love it here. I love the fans, I love the organization. I love everyone here. I can definitely see myself playing here a long time. … The contract stuff’s the contract stuff. I really don’t care for that right now.”

We heard earlier this year that it could be extension-or-bust for Baker and the Dolphins, as the club is unlikely to use the franchise tag on him in 2022.

3 comments on “No Contract Talks Between Dolphins, LB Jerome Baker”