Already set to feature a far less experienced offensive line this season, the Steelers are now pivoting further in that direction. They are releasing All-Pro guard David DeCastro, Tom Pelissero of NFL.com tweets.

A starter since his 2012 rookie season, DeCastro has made the past six Pro Bowls and has secured two first-team All-Pro nods. The former first-round pick is going into his age-31 season. This is certainly a surprise, given DeCastro’s accomplishments and the makeup of Pittsburgh’s offensive front. 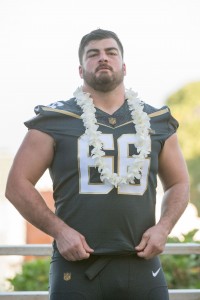 It does not sound like DeCastro is 100% healthy at this stage of his career, however. Ankle issues plagued him in the recent past, and he underwent surgery to address the problem. The nine-year veteran is evaluating his NFL future, according to NFL.com’s Mike Garafolo (on Twitter). DeCastro did not show for Pittsburgh’s OTAs but reported to minicamp. He did not participate in the mandatory offseason workouts, The Athletic’s Mark Kaboly tweets. This release comes with a non-football injury designation, per Aaron Wilson of Sports Talk 790 (on Twitter).

The Steelers and DeCastro agreed to a five-year, $50MM extension back in September 2016. That deal worked out well for Pittsburgh, which ascended to lofty heights on offense in the mid-2010s and remained a top-tier attack for several seasons. DeCastro was a key driver for both Le’Veon Bell All-Pro campaigns, teaming with Maurkice Pouncey and Ramon Foster to form an elite interior O-line. All three players are gone, and all the O-line starters from the “Killer B’s” era are no longer with the team. Pouncey retired, while left tackle Alejandro Villanueva signed with the Ravens after the draft.

One season remained on DeCastro’s contract, but the $10MM-per-year deal was manageable due to the guard market’s growth in the nearly five years since DeCastro signed his deal. The Steelers will save at least $8MM on their 2021 salary cap, but replacing another high-end O-lineman will be a task. The Steelers did bring in former Panthers and Chargers starter Trai Turner for a visit last week. The five-time Pro Bowler’s Pennsylvania trip makes more sense now.

This era-ending transaction will leave the Steelers with major question marks up front. Only one starter is set to return from last year’s unit — Chukwuma Okorafor — and he will be playing a new position. Okorafor is slated to slide from right to left tackle; he has one season’s worth of starting experience. The Steelers re-signed Week 1 right tackle starter Zach Banner, but he is coming off an ACL tear and has started one game in four NFL seasons. Second-year player Kevin Dotson, a fourth-round pick out of Louisiana, is on track to start at left guard. The Steelers drafted Kendrick Green in this year’s third round; he will have a chance to succeed Pouncey at center.