The Bears have agreed to sign Jesse James to a one-year deal. The tight end (Twitter link via NFL.com’s Mike Garafolo). It’s likely a low-cost, one-year deal for the veteran, allowing Chicago to evaluate him in camp with little risk. 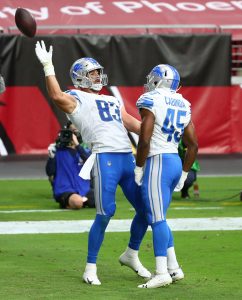 James was released by the Lions earlier this year, just halfway through his four-year, $22.6MM pact he signed back in 2019. Starting out as a fifth-round pick of the Steelers back in 2015, he flashed some potential in Pittsburgh, including a 423-yard campaign in 2018. Between 2016-2018, James managed 112 grabs for 1,113 yards and eight touchdowns.

That potential earned him the big contract from the Lions, but the Penn State product disappointed there. In 32 games (18 starts) over two years, James hauled in just 30 receptions for 271 yards and two touchdowns.

Outside of some reported interest from the Bills back in April, we haven’t heard much about James this offseason. Now, he’ll look to join a TE group that includes Jimmy Graham, Cole Kmet, and fellow newcomers J.P. Holtz and Jake Butt.