Lamont Gaillard‘s stint in Arizona has come to an end. The Cardinals waived the center today, according to veteran reporter Howard Balzer. The move will save the organization about $800K in 2021 and $900K in 2022. 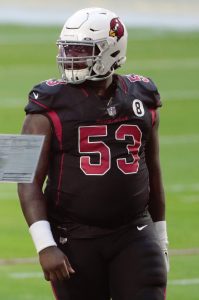 The 2019 sixth-round pick out of Georgia didn’t appear in a single game during his rookie season, but he was able to secure a role on the 2020 squad. Gaillard ultimately saw time in 13 games with two starts, appearing in 19-percent of his team’s offensive snaps. The 25-year-old also appeared in 16-percent of his team’s special teams snaps.

The Cardinals have completely revamped their center position this offseason. The team acquired Rodney Hudson in a trade with the Raiders, and that ultimately led to the trade of former starter Mason Cole, who was dealt to the Vikings. Gaillard would have been competing for the same rotational/backup spot in 2021, but seventh-round rookie Michal Menet will now have the inside track at the gig.

As Balzer notes, the team could still be in the market for another center. The Cardinals are currently rostering only 14 offensive lineman, a modest number for training camp.