Jets Not Looking To Move On From Denzel Mims?

Got news for Jets fans, as we finally have a positive update to pass along on young receiver Denzel Mims. First we heard that he was falling behind on the depth chart in training camp, and then there were rumblings late last week that he might not be long for the team. 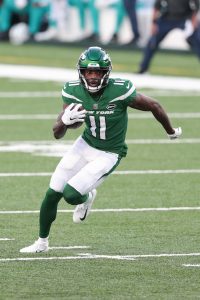 Apparently, the concerns have been overblown. The Jets “are not looking to trade or cut” Mims, sources tell Tony Pauline of ProFootballNetwork.com. New York drafted Mims in the second-round just last year, so it always would’ve been surprising if he had actually been on his way out. His stock apparently hasn’t taken much of a tumble league-wide, as a source told Pauline that “if the Jets want to trade or cut Mims, 31 teams in the league would line up for him.”

Additionally, Pauline has some more details on why Mims fell behind this offseason. Apparently he lost a ton of weight after having a bad reaction to antibiotics he was put on for food poisoning. That unfortunately left him “unable to participate in the offseason program properly.” Sources told Pauline that led him to fall behind on the installation of the new coaching staff’s offense.

Pauline says Mims is still a favorite of GM Joe Douglas, which will go a long way toward keeping him around. The Baylor product was limited to nine games as a rookie by a hamstring injury, but he was reasonably productive in those nine contests, finishing with 23 catches for 357 yards.

It sounds like Mims isn’t going anywhere anytime soon, but he’ll still have his work cut out for him to get on the field. The Jets currently have at least free agent signees Corey Davis and Keelan Cole, veteran Jamison Crowder, and rookie Elijah Moore ahead of him in the pecking order.

16 comments on “Jets Not Looking To Move On From Denzel Mims?”