The Bears will start Justin Fields on Sunday, head coach Matt Nagy announced (Twitter link via Field Yates of ESPN.com). The rookie will start in place of the injured Andy Dalton with Nick Foles serving as the No. 2 quarterback. 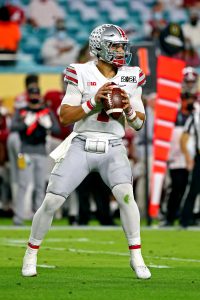 This will be a temporary arrangement, according to Nagy. “When Andy is healthy,” the head coach said. “He’s our starter.”

Dalton was knocked out of Sunday’s win over the Bengals and an MRI confirmed a bone bruise in his knee. That shouldn’t shelve the veteran for too long, though he hasn’t been stellar so far this year. His performance in the Week 1 loss to the Rams was rough and, even though he looked a bit better on Sunday, Fields’ upside cannot be ignored.

Before exiting, Dalton completed nine of his 11 passes for 56 yards and one touchdown. Meanwhile, Fields completed both of his pass attempts and rushed for a touchdown in Week 1. In fairness, the first-round pick wasn’t as strong this past weekend — he completed only six of his 13 pass attempts for 60 yards with one TD and one fumble.

Despite Nagy’s assertion, a strong showing from Fields could change quickly. If he takes the helm, he’ll be just the fifth Round 1 QB to be the primary starter of his club since 2011, following Patrick Mahomes, Jake Locker, Johnny Manziel, and Paxton Lynch.