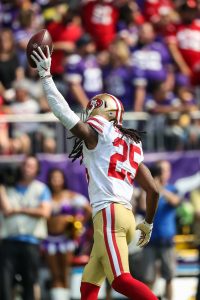 Sherman, a five-time Pro Bowler, could join the Bucs in time for this week’s matchup against the Patriots. He’d go a long way towards filling in for the Bucs’ litany of injuries in the secondary. So far, they’re down Sean Murphy-Bunting (elbow), Jamel Dean (knee), and Carlton Davis (abdomen; ribs). Dean should return sometime soon, but he probably won’t be ready for Week 4.

Sherman made headlines for all the wrong reasons this summer, but he has reportedly received counseling since his July arrest. Meanwhile, his former employers — the 49ers and Seahawks — have both expressed interest in recent months. Ultimately, the defending champs could come away with the former Legion of Boom leader, who is reportedly back to the weight of his salad days.

The 33-year-old turned in a so-so 2018 for the Niners, rebounded for a strong 2019, and lost much of 2020 to injury. Even though he’s no longer in his prime, Sherman could provide a big and timely boost for the Bucs.