With their Panthers matchup in the past, the Jets and Sam Darnold can move in different directions. Zach Wilson made his NFL debut in the one-score loss. Both QBs are unquestioned starters, but the Jets spent extensive time on a scenario in which they’d be teammates. 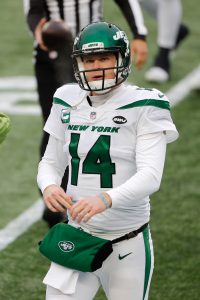 Prior to the teams’ April trade, which sent Darnold to Carolina for three draft choices, the Jets gave strong consideration to keeping their previous starter and still drafting Wilson, Rich Cimini of ESPN.com notes. Robert Saleh indicated the team would have been OK with both passers on the 2021 roster.

“It would’ve been fine in either direction,” Saleh said. “Whether we had Zach at the reins, whether we had Sam, it didn’t really matter to us.”

The Jets could have made the arrangement work, cost-wise, with Darnold’s rookie deal running through 2021. By picking up Darnold’s fifth-year option, the Panthers have extended the deal to 2022. Of course, this also would have introduced the prospect of Wilson being blocked by a former top-three quarterback pick that did not have a long-term future with the franchise.

The Cardinals scuttled this type of plan two years ago, trading top-10 pick Josh Rosen after drafting Kyler Murray first overall a year later. Although the 2012 Colts and 2016 Eagles’ situations were a bit different, both teams moved incumbent starters — former No. 1 overall picks Peyton Manning and Sam Bradford — off their rosters to clear respective paths for Andrew Luck and Carson Wentz. The Chiefs went the other way four years ago, and Patrick Mahomes benefited from ex-No. 1 selection Alex Smith‘s mentoring. Darnold, however, did not offer the stability Smith did and, in his fourth season, made less sense as a mentor for Wilson.

Carolina sent a 2021 sixth-round pick and two 2022 picks — second- and fourth-rounders — for Darnold. The Panthers traded Teddy Bridgewater to the Broncos shortly after making that deal. Jets GM Joe Douglas said the team landing the No. 2 overall pick changed the blueprint. Darnold likely would still be a Jet had last year’s 2-14 finish not secured such a valuable draft choice. Wilson is now the future in New York. The Jets steered clear of veteran backups as well, giving the BYU prospect every opportunity to receive first-team practice reps leading up to his rookie season.