The ankle injury that kept Antonio Brown out of the Buccaneers’ Week 7 game could sideline him for a while. Brown was spotted using a crutch Wednesday, and Bruce Arians said the injury could be “more long-term.” (Twitter links via The Athletic’s Greg Auman). 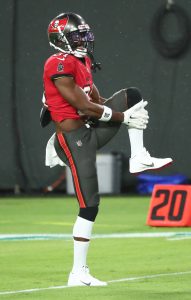 Being iffy on Brown returning immediately after the Bucs’ Week 9 bye, Arians essentially confirmed the team does not expect him for Sunday’s game in New Orleans. An IR move would shelve Brown until Week 12. Brown is dealing with an ankle sprain near his heel, Arians said. As of now, the Bucs are not considering a Brown IR stay, Auman tweets.

This would be Brown’s first multigame injury-related absence since December 2017, when a partially torn calf sustained against the Patriots sidelined him for the Steelers’ final two regular-season games. Although Brown missed most of the 2019 and ’20 seasons due to off-field issues, he has not run into much injury trouble. A COVID-19 contraction and this ankle malady have interfered with what has otherwise looked like a Brown bounce-back season.

Brown, 33, has 29 receptions for 418 yards and four touchdowns in five games. The Bucs played without Brown and Rob Gronkowski in Week 7, having no issue doing so in beating the Bears 38-3. Gronkowski also returned to practice Wednesday, marking a sign he is on track to return after a four-game absence.