Browns Likely To Be Quiet At Trade Deadline

The Browns, currently sitting at 4-3 and in third place in the AFC North, are not expected to swing a major deal in advance of Tuesday’s trade deadline, according to Mary Kay Cabot of Cleveland.com. Cabot does not anticipate the club acquiring a high-profile talent or trading one away. 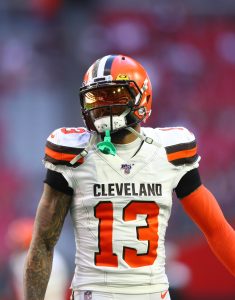 Wide receiver Odell Beckham became the subject of trade speculation even before his first season in Cleveland was over, and those rumors have continued to crop up ever since. The Browns have done their best to quash all such rumblings, and Beckham will likely stay put at least through the end of the 2021 campaign. After all, he is dealing with a painful sprain in his right shoulder, and he is still owed $9MM over the rest of the season, so even if Cleveland were interesting in making a trade, there are obvious hurdles.

Plus, the Browns have every reason to keep Beckham around. Although he and QB Baker Mayfield have yet to develop a consistent rapport, OBJ continues to get open and remains an elite talent, so it would be surprising to see a Cleveland outfit that has postseason aspirations make that type of trade.

The same logic applies to tight ends David Njoku and Austin Hooper. Neither player has offered much production in 2021 — aside from a monster Week 5 game for Njoku that accounted for over half of his 2021 receiving yards and his only touchdown — but the hope is that the passing game will improve as the season goes on, just as it did last year. Njoku is playing on an expiring contract and requested a trade on several occasions last summer, but his most recent comments on the matter suggested that he would like to remain in Cleveland, and Cabot expects both him and Hooper to still be Browns once the deadline has passed.

Speaking of Mayfield, Cabot says the No. 1 overall pick of the 2018 draft will likely require offseason surgery on his injured shoulder. His injury has complicated extension talks, and now, if an extension is reached, it probably won’t happen until after the season. Mayfield is under club control through 2022 via the fifth-year option of his rookie deal, which the Browns exercised earlier this year.

In related news, Cleveland does have starting RT Jack Conklin back in action for today’s critical matchup with the Steelers. Conklin had missed the prior two games with a knee injury.

13 comments on “Browns Likely To Be Quiet At Trade Deadline”