Jaguars head coach Urban Meyer announced that DJ Chark will be out the rest of the season (Twitter link via Adam Schefter of ESPN.com). The wide receiver was placed on IR earlier this month, but the Jags were initially hoping that he could return towards the end of the year. 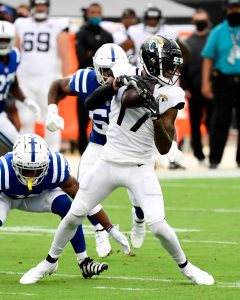 Chark fractured his ankle on Oct. 3 against the Bengals. Afterwards, he was unable to put weight on his leg and ultimately had to be carted off the field.

The former second-round pick enjoyed a breakout campaign in 2019, finishing with 1,028 yards from scrimmage and eight touchdowns. His numbers took a step back in 2020 as he recorded a line of 53/706/5. In four games this year, he notched seven receptions for 154 yards and two touchdowns.

The Jaguars have discussed an extension with Chark, but the injury will complicate things for the former second-round pick. While he rehabs with an eye on 2022, the Jags will move forward with Marvin Jones, Laviska Shenault Jr., and Jamal Agnew as their top receivers.