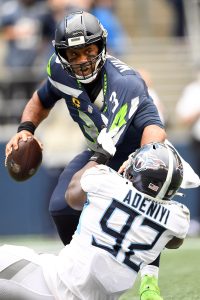 Wilson suffered a ruptured middle finger tendon in his throwing hand last week. He underwent surgery last Friday. Sunday will be the first absence of his NFL career, halting a run of 149 straight regular-season starts.

The Seahawks have a Week 9 bye, giving Wilson extra time to heal before a potential return in November. Longtime backup Geno Smith will start against the Steelers on Sunday night. Smith has not started a game since 2017 with the Giants. Barring injury, Smith will make consecutive starts for the first time since his stint as the Jets’ QB1 ended after the 2014 season.

While Wilson’s status threatens to sink the Seahawks (2-3) in a competitive NFC West race, a Week 10 return would beat the six- to eight-week timetable initially floated. Given Wilson’s ironman start to his career, it obviously should not be ruled out he will be back when first eligible in Week 10.

The perennial Pro Bowler will miss games against the Steelers, Saints and Jaguars. The Seahawks will travel to Green Bay in Week 10. That Nov. 14 game will mark five weeks and two days from Wilson’s injury.

8 comments on “Seahawks To Place Russell Wilson On IR”