On this date in 2018, the Broncos released cornerback Adam Jones. As the veteran broke the news himself on social media, he vowed to continue his career elsewhere. 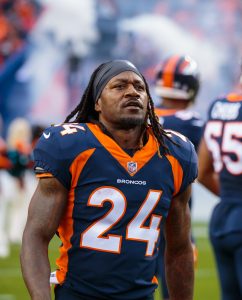 “Well, Denver, it was good,” Jones wrote on Instagram. “Thanks for the opportunity!!!! On to the next.”

Jones didn’t realize it at the time, but this pretty much marked the end of his NFL career. Jones, 35 at the time, hooked on with the Broncos that summer to serve as their punt returner and No. 4 CB. Once a dynamic threat in the return game, he did not live up to expectations. Jones had just 25 total yards off of seven attempts.

Jones was showing obvious signs of decline before his Denver deal — few teams considered him before the Bengals rejected his option for 2018. The veteran was limited to just nine games with the Bengals in 2017 and didn’t fare particularly well on his 299 defensive snaps. Pro Football Focus assigned Jones the worst mark (47.1) of his entire career that year, indicating that he was more of a return man than a reliable corner.

Jones’ legacy may be clouded by his string of off-the-field incidents, but he was a force in his prime. After being selected by the Titans with the No. 6 overall pick in the 2005 draft, Jones offered up a series of head-turning highlights, including three punt return touchdowns in his second pro year.

Years after being ID’d as a suspect in the now-infamous Atlanta incident, Jones found his second wind with the Bengals. Jones spent eight years in the Bengals’ secondary and put together three straight seasons with three interceptions in each. In 2014, Jones earned his first ever First-Team All-Pro nod and received a Pro Bowl selection in 2015. He achieved a great deal throughout his tumultuous career, but his 2018 release proved that he could no longer outrun Father Time.