Frank Gore has slid off the NFL radar for a bit, seeing the Titans go with Adrian Peterson to help fill their Derrick Henry void. And the 16-year veteran is preparing for a boxing foray. 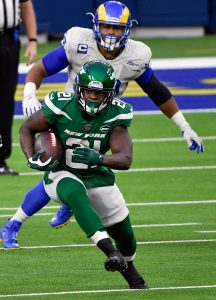 Set to fight former NBA veteran Deron Williams on the undercard of the latest boxing event headlined by YouTube stars — a card set for Dec. 18 in Tampa — Gore remains open to a return to the NFL. The future Hall of Fame running back said during a prefight press conference he would consider ditching his boxing plans if a team needed him. “I might say eff it and go with them,” Gore said of potentially scrapping the Williams fight to play a 17th season.

Gore, 38, spent the 2019 season with a contending team, helping the Bills to the playoffs. Otherwise, he spent the post-San Francisco portion of his career helping less talented squads. Gore played for the Colts from 2015-17, caught on with the Dolphins in 2018 and played with the Jets last season.

Despite his advanced age, Gore made 14 starts for the Jets and rushed for 653 yards (albeit at a career-low 3.5 per carry) and currently has exactly 16,000 for his career. That total trails only Emmitt Smith and Walter Payton in NFL history. Gore was considering retirement in June but was also open to catching on elsewhere. He certainly has connections around the league and has proven incredibly durable, having missed just three games over the past 10 seasons.

A few teams have seen their starting back miss extensive time this season — the Bears, Chiefs, Eagles, Giants, Panthers and Titans among them — and the Browns have gone through multiple games without Nick Chubb and Kareem Hunt. Gore has not been connected to any vacancies just yet, but given his durability and historically long career for a running back, a late-season partnership should not be ruled out. The four-round Gore-Williams bout features a 215-pound weight limit; that is just above Gore’s listed playing weight.