After a turbulent week, the Browns and Odell Beckham Jr. agreed to separate. The disgruntled wide receiver is not set to be waived until Monday, but he did not practice this week and is effectively done as a member of the Browns. It took some negotiating to complete this transaction. 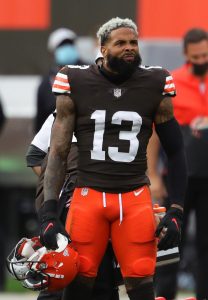 A Friday agreement paved the way to the sides’ impending divorce, and some interesting details surfaced regarding Beckham’s status Saturday. While the Browns tweaked Beckham’s deal to make him a 2022 free agent (instead of a 2024 UFA, which the wideout’s Giants-constructed contract previously called for), his salary if he is claimed on waivers would go unchanged. A team that is awarded Beckham on waivers would be hit with the receiver’s $7.25MM in remaining salary. Beyond that, Cleveland made more changes.

If no one claims Beckham, the Browns will only be on the hook for $4.25MM of that salary, Ian Rapoport of NFL.com tweets. The Browns converted some of Beckham’s salary into a roster bonus, Mike Florio of Pro Football Talk notes. The NFLPA signed off on Cleveland’s restructure, CBS Sports’ Jason La Canfora tweets.

The bonus would be another team’s responsibility if it claims OBJ, increasing the likelihood he will go unclaimed Tuesday. Claims are due by 3pm CT Tuesday. Beckham will lose out on that $3MM bonus if no team claims him, further illustrating his desire to hit free agency. The Browns trimming years off the contract and using a roster bonus stands to help OBJ while saving the team some cash.

The Browns could have converted much of Beckham’s salary to a signing bonus, reducing the base to the point it would increase the likelihood a team claims him. This ran the risk of Beckham being claimed by a team near the top of the waiver priority list, a scenario the scuffling wideout almost certainly wants to avoid. The nature of this restructure also increases the chances Beckham will end up with a contender of his choosing.

AFC teams like the Chiefs, Patriots or Raiders could show interest, but NFC squads are also preparing to pursue him. The 49ers, Saints and Seahawks are expected to show interest in Beckham, in the likely event he hits free agency Tuesday afternoon. The Raiders also appear to prefer DeSean Jackson to Beckham. The Saints made a series of calls on receivers — Beckham and Darius Slayton among them — at the deadline, Jeremy Fowler of ESPN.com notes. New Orleans’ lack of a proven quarterback figures to hurt its chances, however. Beckham was also intrigued by the 49ers a while back, Fowler adds. The 49ers were linked to Beckham via trade before the Browns acquired him in 2019.

OBJ has pocketed a considerable amount of cash over the course of his career, but he turned 29 this week and has seen his value crater in Cleveland. The former Giants Pro Bowler has been unable to consistently show that form with the Browns, with injuries and a limited rapport with Baker Mayfield impacting this decline. None of OBJ’s issues in Cleveland stemmed from off-field matters, according to ESPN.com’s Jake Trotter, who adds Beckham and Mayfield were not at odds off the field. But on it, the two failed to click for most of the three-time Pro Bowler’s three-year Cleveland stay.