8:03pm: Cook is expected to miss at least the next two games – against the Lions and Steelers – with an expected return against the Bears on Dec. 20, as reported by ESPN.com’s Adam Schefter (on Twitter).

5:07pm: It was reported earlier today that Dalvin Cook had been diagnosed with a torn labrum and shoulder dislocation that would sideline him for the next two games. This was good news as there was fear Cook may have to miss the rest of the season.

The news continues to improve as, according to Mike Zimmer, Cook is only “day-to-day.” Chris Tomasson of the Pioneer Press reports that when asked if Cook has a torn labrum, Zimmer replied, “No.” Asked about the dislocated shoulder and Zimmer answered, “I’m not going to say.” While this still leaves room for concern, Minnesota will be relieved to discover that the injury to its star running back doesn’t seem as serious as it originally appeared.

11:46am: Dalvin Cook has been diagnosed with a torn labrum and dislocation in his shoulder (Twitter link via NFL.com’s Ian Rapoport). However, it won’t be a season-ender for the Vikings running back. 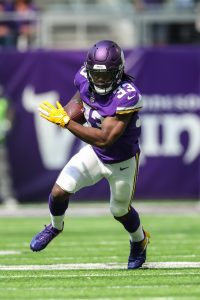 That’s excellent news given that Cook had to be carted off the field during Sunday’s game. Following the MRI, the Vikings believe that Cook can come back after a few games of rest, similar to how he managed to return towards the end of 2019. The plan is to hold him out of their next two games against the Lions and the Steelers. After that, if everything checks out, he’ll be able to face the Bears in Week 15 (Twitter link). Placing Cook on IR would automatically rule him out for three games, so the Vikings will probably keep him on the 53-man roster for the time being.

Clearly, the Vikings offense is at its best with a healthy and productive Cook. Last year, he enjoyed his second-straight Pro Bowl season with 1,557 rushing yards, 17 total touchdowns, and a 5.0 yards per carry average. It was also his second-straight 14-game slate, a big step up from his first two campaigns.

So far this year, Cook has 773 rushing yards and four touchdowns with a 4.5 yards per carry average. He’s also contributed as a pass-catcher with 27 grabs for 202 yards.

Without Cook, the Vikings will rely on Alexander Mattison to keep the chains moving. He’s made two starts in place of Cook so far this year, totaling 225 yards on the ground plus 13 catches for 99 yards.