Although the Lions no longer have ex-Patriot staffers running their operation, they still looked to the New England roster to help their kicking situation. 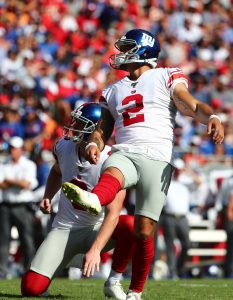 The Lions are signing kicker Riley Patterson off the Patriots’ practice squad, Mike Reiss of ESPN.com tweets. The team is restocking its kicker situation, with the Detroit Free Press’ Dave Birkett adding (via Twitter) the team is signing Aldrick Rosas to its practice squad. Detroit placed Austin Seibert on IR on Saturday.

By rule, Patterson must remain on the Lions’ active roster for at least three weeks. The former Memphis kicker will replace Ryan Santoso here. Santoso is now off Detroit’s practice squad.

Santoso kicked in three games for the Lions, his fourth team this year, and went 5-for-6 on extra points and 2-for-3 on field goals. The missed field goal came during Sunday’s tie game in Pittsburgh, which certainly did not feature optimal kicking conditions. Santoso has been with the Giants, Panthers, Titans and Lions this year.

Patterson entered the league as a Vikings UDFA in May but bounced to the Patriots last month. Minnesota cut him from its IR via injury settlement in August. Patterson has yet to kick in an NFL game but spent the previous four seasons as Memphis’ kicker. He made 92% of his field goal tries as a junior in 2019 but saw his make rate plummet to 68% last season. Patterson will be the Lions’ third kicker this year, following Seibert and Santoso.

Santoso joined the Giants a few months after they waived Rosas, who has since bounced to the Jaguars and Saints. New Orleans moved on from the former Pro Bowler earlier this season. Rosas kicked in four games with the Saints, making 1 of 4 field goal attempts.