On his first full day as a free agent, Odell Beckham Jr. is dominating the NFL news cycle. Offers are coming in, and several teams remain in the mix. 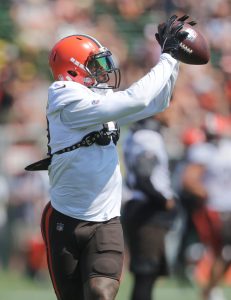 The Saints emerged as a team on Beckham’s radar, and Mike Florio of Pro Football Talk tweets a belief in certain league circles exists that OBJ will end up in New Orleans. This is not a done deal, and New Orleans’ quarterback situation will affect its viability here. Beckham is a New Orleans native.

While some around the league view the wide receiver-needy Saints as having a leg up, the Seahawks have indeed reached out since Beckham became a free agent, Jeremy Fowler of ESPN.com tweets. Seattle, which was linked to Antonio Brown last year and kept Josh Gordon in their plans for multiple years, was viewed as a suitor — and a frontrunner as recently as Sunday — for the eighth-year wideout.

The Patriots also “definitely” remain in the mix, according to Florio (on Twitter), though a previous report did not list them as a team Beckham was considering. New England also has a history of big-ticket receiver moves under Bill Belichick, and with the Browns covering $4.25MM of his salary, money is not the significant factor it usually is in high-end free agent pursuits. Beckham’s recent struggles notwithstanding, the Pats are not dismissing the notion he would be an interesting addition, NBC Sports Boston’s Tom Curran notes, and the team believes the mutual respect between Belichick and Beckham provides a genuine opportunity for a partnership, per Mike Giardi of NFL.com (Twitter links).

New Orleans lost Jameis Winston for the season and went with Trevor Siemian as its starter in Week 9, keeping Taysom Hill in his gadget role. The Saints, however, have a major receiver need and attempted to trade for OBJ before the deadline. Beckham’s high salary certainly affected that potential deal, but he has since cleared waivers, making an addition much more palatable to teams. The Saints, who cut Emmanuel Sanders earlier this year, will not have Michael Thomas this season and have felt the effects of their thin receiver depth chart.

With the Packers and Chiefs listed among teams to attract OBJ interest, it remains to be seen if the 29-year-old target — who is hoping to bounce back potentially ahead of a 2022 free agency run — will choose a Saints team with a far less appealing quarterback situation. Green Bay has offered Beckham a veteran-minimum deal, and it is unlikely another team will come in with a far more lucrative proposal. A sixth team is also in the mix, The Athletic’s Jeff Howe tweets. While the 49ers were mentioned as Beckham suitors before his Browns exit, it is not known if they are still pursuing him.