The Rams will release DeSean Jackson this week (Twitter link via NFL.com’s Ian Rapoport). This was the expected move after the Rams were unable to find a trade for the veteran wide receiver. As a post-deadline drop, Jackson will be subject to the waiver wire for 24 hours after his release. If no one claims him, he’ll be free to sign with any club.

While Jackson drew interest on the market, per the Las Vegas Review-Journal’s Vincent Bonsignore (on Twitter), teams were anticipating a release and did not want to surrender any assets. That is somewhat interesting given Jackson’s post-deadline departure, which will not allow him to control his destination — at least, not initially. 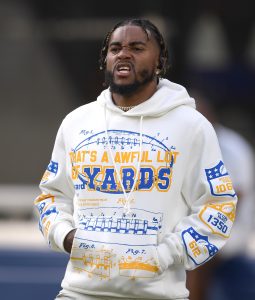 Jackson joined the Rams on a one-year, $4.5MM deal this year with the expectation that he’d be a focal point of the offense. Instead, he’s only been on the field for about one-third of L.A.’s snaps. That didn’t sit well with Jackson, who requested a change of scenery earlier this month.

If DJax goes unclaimed, the Rams will be left with the balance of Jackson’s $2.75MM base salary on the books. Either way, they’ll be without one of the game’s most prolific deep threats. Even at the age of 34, Jackson has torched the opposition for 27.6 yards per catch. Granted, the sample size is limited with just eight receptions, but there’s no question that DJax still has top-end speed.

Jackson has yet to top 25 snaps in any of his games this year. His playtime only dwindled from there, with four snaps against the Lions in Week 7. After that, the Rams held him out of action against the Texans to avoid a trade-scuttling injury.

For his career, Jackson has 620 catches for 10,877 yards and 57 touchdowns. Now, after parting ways with his fourth pro team, he’ll look to add to those totals elsewhere.