Dolphins cornerback Xavien Howard‘s dissatisfaction with his contract led to his requesting a trade this summer, and although player and team were able to work out a revised pact to keep Howard placated, Miami’s 1-7 record in 2021 made him an obvious trade candidate in advance of last week’s deadline. And as Ian Rapoport of NFL.com writes, the Ravens made a push to add Howard in an effort to bolster their secondary. 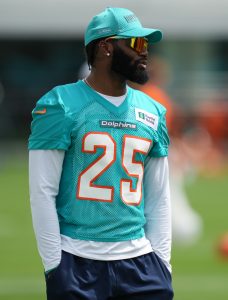 Baltimore is sitting at 5-2 and clinging to first place in the AFC North, but the club has dealt with myriad injuries to star players and other key contributors. Per Rapoport, GM Eric DeCosta was actively trying to trade for proven talent at multiple positions of need, and Howard was the most notable target. The Ravens lost playmaking CB Marcus Peters for the year just before the regular season started, and Howard — who has twice the led the league in interceptions — would have made for an excellent replacement.

Pro Football Focus has assigned Howard a below-average 56.2 coverage grade this season, a steep drop-off from his 89.6 mark one year ago. Still, having him line up across from Marlon Humphrey was doubtlessly a tantalizing proposition for DeCosta, and with Howard, Humphrey, and Peters all under club control through at least 2022, the Ravens would have been loaded at CB next season. It would have also made it easier to allow Anthony Averett, who has replaced Peters in the starting lineup, to depart in free agency.

Of course, the Dolphins were not going to let Howard go for nothing, and Rapoport says that the ‘Fins were likely looking for a first-rounder and more for their star defender. DeCosta may have been willing to pony up that type of capital, but only if Miami absorbed at least some of Howard’s remaining $13.785MM salary for 2021.

In the end, the good faith negotiations between the two clubs did not produce a deal, and the Ravens — who did not swing a trade with any team, despite DeCosta’s best efforts — will attempt to secure a playoff berth with the talent already on the roster.