Not yet official, but the early word isn’t promising. The Washington Football Team fears a torn ACL for star defensive end Chase Young, according to NFL.com’s Ian Rapoport (Twitter link). 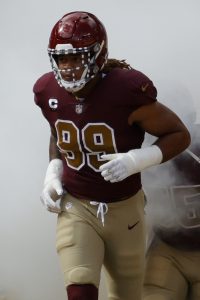 Young went down in the second quarter with a dreaded non-contact injury. Washington went on to win 29-19 over the Bucs, but the former No. 2 overall pick did not return to the field. Young declined to be carted off, but team doctors are pretty sure that he’s looking at a season-ending ACL tear. And, given the timing, his rehab could extend into the summer.

Although Young wasn’t having a banner year before the injury, there was hope for a stronger second half. Young finished last year with 7.5 sacks, capturing 2020 Defensive Rookie of the Year honors. So far this year, he’s got just 1.5 sacks with 25 total stops.

If Young is actually done for the year, Washington will be without both of their top defensive ends for a while. Montez Sweat — out with a broken jaw — is still weeks away from returning. James Smith-Williams, Casey Toohill, Bunmi Rotimi, and seventh-round rookie Shaka Toney stand as the only other healthy DEs on the depth chart.