The Falcons have designated tight end Hayden Hurst for return from injured reserve. To make room for Hurst, the Falcons have waived veteran punter Dustin Colquitt. 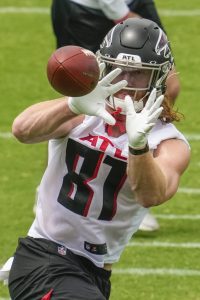 Atlanta traded for Hurst last year, but the team’s new regime replaced him as the primary tight end by selecting Kyle Pitts No. 4 overall in April. Hurst caught 56 passes for 571 yards and six touchdowns in 2020. While Pitts is now the leader of this group and has emerged as one of the NFL’s most promising rookies, Hurst still had 20 receptions through nine games, up until his ankle injury.

The Falcons will now have 21 days to either activate Hurst or lose their opportunity to use him for the rest of the year. Odds are, he’ll be ready to go soon. Hurst, 28, is due to be a free agent in March since the Falcons declined his fifth-year option.

Colquitt, a 17-year-veteran, appeared in six games as Cameron Nizialek‘s fill-in. He was doing well, up until he was placed on the reserve/COVID-19 list a couple of weeks ago. Since then, the Falcons have picked up longtime Saints punter Thomas Morstead. Morstead is now set to continue in the role for the rest of the season.