James Conner seems to have found a home with the Cardinals. As he plays out his one-year contract in the desert, the running back says he has little reason to leave. 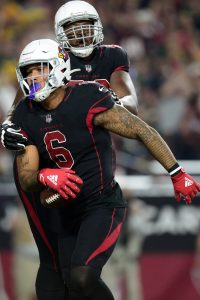 “Man, I want to win a Super Bowl here,” Conner said (via Bob McManaman of the Arizona Republic). “I love the weather and everything this team has going and my teammates out here and the coaching staff. I don’t see why not, why I wouldn’t want to be here. We have all the resources and everything we need to be successful. We’re going to take it one week at a time first. We’ve got a big game against Chicago coming up. But after the season, I’ve got a lot of love for the Cardinals, so we’ll see what happens.”

Conner, 27 in May, has found paydirt eight times over the last five games, giving him a total of 13 touchdowns on the year. Through eleven games, that’s already enough to match his previous single-season best. Now, he has a chance to leapfrog Chris Johnson‘s all-time franchise record of 20 TDs.

Conner admitted that his “options were limited” when he agreed to join the Cardinals in the spring. Now, his one-year, $1.75MM contract stands as one of the best values in the NFL. There’s no doubt that Conner will get a big pay bump in 2022 — ideally, he says he’d like to make it happen in Arizona:

“I just came, and I wanted to play my best football. My options were limited. This is the plan. It’s the Cardinals. And I wouldn’t want to be nowhere else right now.”

11 comments on “James Conner Wants To Stay With Cardinals ”