FRIDAY: Swift is now officially out for Week 13. The Lions will sit their ascending running back starter against the Vikings. Swift did not take the field during Detroit’s three practices this week. 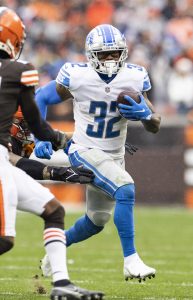 WEDNESDAY: The Lions might be without their starting running back for an extended period of time. ESPN’s Jeremy Fowler reports (via Twitter) that D’Andre Swift‘s injury is a sprained AC joint, and that the team will be cautious with regards to getting him back in the lineup.

Swift had played in every game so far this season, producing 555 yards and four touchdowns on 140 carries, adding another 429 yards and two scores on 56 catches. The Lions, as the NFL’s only winless team, however, will likely not be in any hurry to get the 2020 second-round pick on the field again.

In Swift’s absence, look for Jamaal Williams to take over as the lead back, with Jermar Jefferson getting an increased workload as well. In the passing game, this news likely means more targets for tight end T.J. Hockenson and wide receivers Amon-Ra St. Brown and Kalif Raymond.

The Lions will try again to get into the win column for the first time on Sunday when they host the Vikings.