The Buccaneers will have another of their longtime cornerback starters in uniform Sunday. They activated Carlton Davis from IR on Friday. The fourth-year cover man is set to suit up for the first time since Week 4. 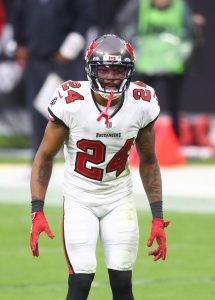 A quad injury in New England rerouted Davis’ season. He has missed the past seven Bucs games, joining Sean Murphy-Bunting in being sidelined for a sizable chunk of the season. But both are now back on Tampa Bay’s active roster.

While the Bucs are still without Richard Sherman and received notice Thursday that Mike Edwards will be suspended three games, the Bucs have not had Davis and Murphy-Bunting on the field together since Week 1. The duo has played together as starters for most of the past three seasons, including in Super Bowl LV.

In addition to Davis’ extended absence this year, he missed four games between the 2019 and ’20 seasons. He still leads the NFL in passes defensed (42) in that span. Davis added four interceptions last season and grabbed another pick this year. This season’s home stretch stands to be pivotal for the Auburn product, who is due for free agency in 2022.