With Carson Wentz‘s Colts usage tracking toward the Eagles receiving a first-round pick from their recent quarterback trade, the NFC East franchise will face a big decision in 2022. The Eagles are in line to have three first-round picks next year, giving the team ammo to move up in the draft or dangle picks for an established quarterback. 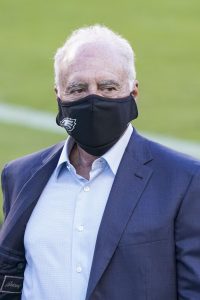 The prospect of the Eagles standing pat at QB next year has entered the equation, with Jalen Hurts showing growth as this season has progressed. But the franchise is not yet certain Hurts will be a long-term starter.

Owner Jeffrey Lurie, who directed the Eagles’ front office to avoid adding competition for Hurts’ QB1 gig this offseason, still believes in the second-year passer, Jeff McLane of the Philadelphia Inquirer notes. GM Howie Roseman, however, is not as bullish on Hurts long-term.

Lurie led the way in the Eagles drafting Hurts in the 2020 second round, with McLane adding Roseman supported the pick and made the final decision to pull the trigger. The move ended up triggering a seismic shift at QB in Philly. Wentz went from big-ticket extension recipient in summer 2019 to Colts starter by winter 2021. And, it seems, the Eagles are still entertaining the prospect of making another big splash.

Lurie is believed to have led the way in the Eagles being in the Deshaun Watson mix, per McLane, who adds Hurts was viewed as a possible trade chip in such a deal. Of course, Watson would have needed to approve a trade to Philadelphia. Thus far, the Texans quarterback is not believed to have waived his no-trade clause for any team but the Dolphins. Watson figures to be moved in 2022. While the Eagles stand to be interested again — especially once clarity regarding the embattled star’s NFL discipline emerges — Miami appears to have a lead on the field at this juncture.

Hurts is completing 61% of his passes and averaging 7.0 yards per attempt. He sits 22nd in QBR. Not upper-echelon numbers, but the ex-Alabama and Oklahoma starter has obviously made a major impact on the ground for the Eagles as well. Hurts has a shot at a 1,000-yard rushing season, sitting at 695 (with eight TDs) through 12 games. Neither Randall Cunningham nor Michael Vick accomplished that as Eagles. Catalyzed by 200-yard rushing games in four of their past five games, the Eagles lead the NFL rushing. It would be interesting if the Eagles bailed on him as a starter after such an accomplishment, but quarterbacks like Watson, Russell Wilson and Aaron Rodgers figure to be heavily involved in trade rumors again in 2022.

The Eagles would acquire the Colts’ first-round pick if Wentz plays 75% of Indianapolis’ offensive snaps this season. The injury-prone QB is on pace to do so. Though the Colts could make a run to the playoffs, the Eagles at this point project to have three picks inside the top 20. While the 2022 QB crop is viewed as a significant step down from 2021’s celebrated group, Hurts stumbling down the stretch would certainly link the Eagles to first-round passers. The Eagles’ quarterback decision figures to be one of next year’s top dominoes.