The Cardinals have designated J.J. Watt for return from the injured reserve list, per a club announcement. With that, Watt can begin practicing with the team as soon as today and rejoin the 53-man roster at any time over the next three weeks. 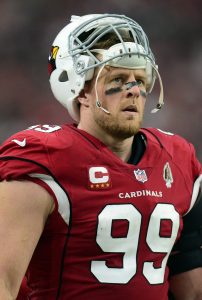 Watt may or may not be trotted out in Week 18 against the Seahawks, a game that could decide the NFC West. But, beyond that, it appears that Watt could suit up for the playoffs. That’s phenomenal news, especially since doctors told him that his surgically-repaired shoulder would keep him sidelined all year long.

“They tell me I’m done, I have to get surgery and it’s going to take four to six months,” Watt said a few weeks ago (via AZCardinals.com). “I’m sitting there and I can easily pout and easily say, ‘Woe is me, four to six months, I’ll do what I have to do.’ But instead I said, ‘Nah, I’m not going to accept that.’”

Watt’s defied doctors in the past, having returned from a pectoral tear to play in the Texans’ two playoff games in 2019. And, when healthy, he’s still playing at a high level. In a limited sample of 341 defensive snaps this year, Pro Football Focus had him ranked as a top-10 interior defensive lineman.