In one of the less surprising moves of “Black Monday,” Lions head coach Dan Campbell confirmed in his Monday morning press conference that offensive coordinator Anthony Lynn will not remain a part of the coaching staff in Detroit. 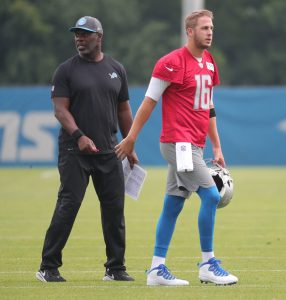 Coming off being fired by the Chargers last season, Lynn took the role of play caller under first-year head coach Dan Campbell. After starting the season with eight straight losses, Campbell relieved Lynn of his play calling duties. The Lions proceeded to finish 3-3 over their last six games and it became apparent that Lynn was a lame duck in his position.

Lynn’s resume isn’t terrible as he left Los Angeles boasting a winning record as a head coach. In his first two seasons leading the Chargers, they finished 2nd in the division and even nabbed a Wild Card spot in his second year, winning a playoff game before getting beat in the Divisional Round. Lynn has had success in the league as a running backs coach and has strong leadership qualities that his players respect. He should find a job in the NFL again, before long.