The league’s third head coaching hire has reportedly been made. Ian Rapoport of NFL Network tweets that the Giants are hiring Bills offensive coordinator Brian Daboll as their new HC. 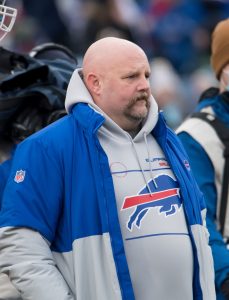 Daboll was thought to be the favorite for the job when he became the first candidate to receive a second interview in New York. That, along with the obvious connection to newly-hired GM Joe Shoen, had many speculating that the position was his to lose.

Of course, the Giants weren’t the only suitor for the 46-year-old’s services. He was named as one of three finalists for the Dolphins’ HC vacancy, and recently considered the favorite in Miami. Rapoport’s colleague, Tom Pelissero, tweets that the Saints also wanted to interview him.

Instead, he will be replacing Joe Judge in an attempt, along with Schoen, to reset the Giants on an organizational level. The two hires prove that the franchise’s stated goal of looking from outside New York to find its next HC and GM has been fulfilled.

Daboll will be tasked first and foremost with improving the Giants’ lackluster offense in what could very well be a make-or-break year for quarterback Daniel Jones. His job developing Josh Allen would certainly represent cause for optimism on that front.

Meanwhile, this news drops the number of remaining candidates set for second interviews with the Dolphins down to two: Mike McDaniel and Kellen Moore, the OCs for the 49ers and Cowboys, respectively.

Here’s a final look at the Giants’ coaching search:

40 comments on “Giants To Hire Brian Daboll As Head Coach”