JuJu Smith-Schuster‘s season will, in fact, resume. Despite suffering what was deemed a season-ending shoulder injury in October, the veteran slot receive is expected to play Sunday night in Kansas City, Ian Rapoport of NFL.com tweets. 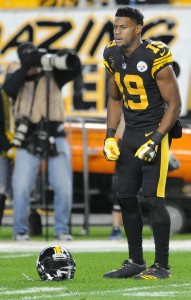 The Steelers activated Smith-Schuster off IR on Saturday, clearing the way for his first action since Week 5. Smith-Schuster, who underwent shoulder surgery nearly three months ago, returned to practice this week and has not experienced any issues. While the Steelers are double-digit underdogs in this matchup, having their full assortment of receivers back in uniform will help the visitors’ cause.

Combining for over 2,000 yards, Diontae Johnson and Chase Claypool have served as Ben Roethlisberger‘s top weapons this season. JuJu did post a 52-yard receiving performance in the team’s Week 1 upset win over the Bills, but he did not contribute as much to a slumping offense in his four ensuing games. Still, the veteran has a Pro Bowl under his belt — from his 1,426-yard 2018 season — and provided a key assist during Big Ben’s 2020 comeback season (831 yards, career-high nine touchdown receptions). Smith-Schuster, 25, will be playing to boost his free agency stock ahead of another bid.

Smith-Schuster discussed deals with the Chiefs and Ravens this past offseason but opted to stay with the Steelers for familiarity purposes, signing a one-year deal worth $8MM. This injury likely will affect the fifth-year wideout’s 2022 market to some degree, but the USC alum displaying full health in Sunday’s game would stand to help him in his second free agency bid.