After injuring his ankle in the 49ers’ Divisional Round win over the Packers, offensive tackle Trent Williams is looking likely to start in the NFC Championship game tomorrow in Los Angeles, according to a tweet from ESPN’s Nick Wagoner. In the tweet, Wagoner relayed a message from head coach Kyle Shanahan that Williams is adamant that he will be able to play and that Shanahan would be surprised if he doesn’t. 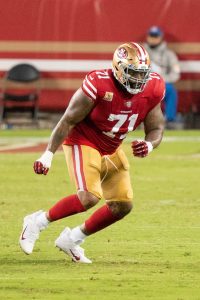 There was a bit of concern for Williams in Green Bay last Saturday night when he was seen on crutches after the game. The first-team All-Pro appeared to injure his ankle early in the third quarter, according to Sports Illustrated’s Grant Cohn, but finished the game with some ankle tape and some true grit. Williams was a question mark to play in the team’s Wild Card win over the Cowboys due to an elbow injury suffered in Week 17. He sat out the regular season finale – which would have ended San Francisco’s season if not for a come-from-behind victory over their next opponent, the Rams – but was able to start once again for both playoff games. The nine-time Pro Bowler has continued to play at an elite level in his second season with the 49ers, an encouraging sign given that he is under contract with the team for another five years after this season concludes.

Wagoner continued in a follow up tweet that running back Jeff Wilson is the only other player on the injury report, being the listed as questionable alongside Williams.