Matt Rhule said he preferred his next offensive coordinator have NFL play-calling experience. One of the two coaches to receive second interviews for this position checks that box. 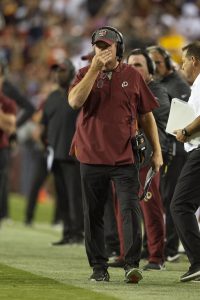 After meeting with Colts running backs coach Scottie Montgomery, the Panthers gave former Washington head coach Jay Gruden a second interview Thursday, according to NFL.com’s Ian Rapoport (on Twitter). Gruden was one of two former HCs to go through a first interview with Carolina, with Ben McAdoo being the other.

Although Montgomery served as East Carolina’s head coach for three seasons and Maryland’s OC for the next two, he has yet to call plays at the NFL level. Rhule’s past in the college ranks, however, makes Montgomery’s advancement here interesting. Gruden called plays for 10 seasons, doing so with the Bengals, Washington and Jaguars.

Gruden and Montgomery, after previously interviewing virtually, met in-person with Carolina brass, Steve Reed of the Associated Press notes. This is a crucial hire for Rhule, who is on the hot seat after two sub-.500 seasons on the job. A previous report suggested the embattled HC needed a “rock-star offensive coordinator” to save his job.

While it does appear Rhule will receive a third season, Gruden landing the OC job would give the Panthers a natural interim HC in the event Rhule cannot keep it through the 2022 season. Gruden, 54, agreeing to join Carolina’s staff would be interesting as well since he recently accepted an OC gig for a team with a head coach (Doug Marrone) on the hot seat. Gruden went one-and-done in Jacksonville in 2020 and did not coach this season.