Nearly 10 names have now been connected to the Panthers in their offensive coordinator. Packers quarterbacks coach Luke Getsy and former Texans OC Tim Kelly are now in the mix. 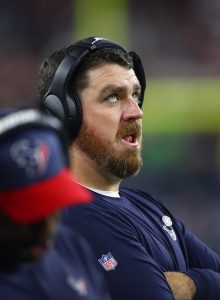 Both Getsy and Kelly interviewed for the Carolina job, Jeremy Fowler of ESPN.com tweets. The Panthers have not interviewed everyone to whom they have been connected, but the team has met with Colts wide receivers coach Mike Groh, Colts running backs coach Scottie Montgomery and Vikings offensive coordinator Klint Kubiak.

Getsy, 37, has now interviewed for jobs on two coaching tiers this offseason. The Broncos met with the Packers assistant for their HC job last week. Although Getsy also serves as Green Bay’s passing-game coordinator, he is the least experienced candidate to be linked to the Carolina OC gig thus far. Getsy did serve as Mississippi State’s OC during the 2018 season. His NFL experience has come entirely in Green Bay, where he has worked his way up from the quality control level.

In making their widely debated David Culley decision, the Texans also fired Kelly. Culley kept Kelly in place despite the latter’s extensive ties to Bill O’Brien. Kelly served as Houston’s OC for three seasons, taking over play-calling from O’Brien during that span. Deshaun Watson made his second and third Pro Bowls on Kelly’s watch, while Davis Mills showed improvement as this season progressed.

Interestingly, O’Brien (along with Jay Gruden) have been mentioned as candidates for the Panthers job as well. The Jaguars have also met with O’Brien, who spent the season as Alabama’s OC, for their HC job. Texans QBs coach Pep Hamilton has also popped up on the radar for this expansive Panthers OC search.