The Panthers have Bill O’Brien and Jay Gruden on the radar as they search for their next offensive coordinator, according to sources who spoke with ESPN.com’s Adam Schefter. Schefter also hears that Carolina is expected to reach out to Rams offensive coordinator Kevin O’Connell about the vacancy. 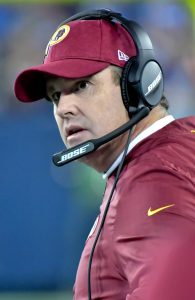 Washington fired Gruden midway through his sixth season after winless start to the 2019 season. He clashed with ownership and team brass throughout his tenure, though he was far from alone in that regard. Dwayne Haskins aside, he offers a solid track record of grooming young quarterbacks, dating back to his early days with the Bengals and QB Andy Dalton. Gruden re-emerged in 2020 as the Jaguars’ offensive coordinator but didn’t make the transition to the short-lived Urban Meyer era.

O’Brien, meanwhile, took the Texans to the playoffs four times, including 2015 and ’16 when he had the likes of Brian Hoyer and Brock Osweiler under center. Still, the Texans came up short in the postseason, despite the presence of Deshaun Watson. His work as a GM left much to be desired, but O’Brien is still in demand — in addition to the Panthers OC job, the Jaguars are eyeing him as a head coaching candidate. His interviews will have to wait at least a couple more days, however, as he guides the Alabama offense through the National Championship game.