Jeff Wilson is sticking around San Francisco for at least another season. The running back announced on Instagram that he’s re-signing with the 49ers. 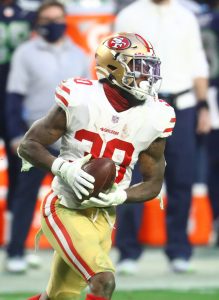 “We got business to handle,” Wilson wrote. “When you got something to prove it hit different! Last year was honestly the toughest time of life but through those times it has built and molded me to what you’ll see! Ready to slide with my guys.”

Following a breakout 2020 campaign that saw him finish with 733 yards from scrimmage and 10 touchdowns, Wilson had a delayed start to the 2021 season after suffering a summer foot injury. The running back returned to the field in November and ended up seeing time in nine games (four starts) for the 49ers, collecting 325 yards from scrimmage and two scores. He didn’t get a touch in two playoff games.

Elijah Mitchell exploded as a rookie in 2021, and he’ll likely lead the depth chart heading into his sophomore season. The 49ers are also rostering fellow 2021 draft pick Trey Sermon along with JaMycal Hasty.