Following the sudden trade of Tyreek Hill, the Chiefs are eyeing some offensive reinforcement. NFL Network’s Tom Pelissero reports (via Twitter) that the Chiefs hosted wide receiver Marquez Valdes-Scantling. The reporter cautions that a deal is not imminent. 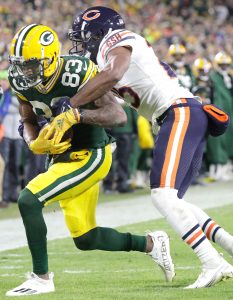 Valdes-Scantling was a fifth-round pick by the Packers in 2018, and he didn’t miss a single regular season game during his first three seasons in the NFL, culminating in a 2020 campaign where he finished with a career-high 703 yards from scrimmage and a league-leading 20.9 yards per reception. The receiver had a stint on the IR in 2021 that limited him to only 11 games, and he finished the season with 430 receiving yards and three touchdowns.

Jones was also a 2018 draft pick, with the second-round RB getting selected by the Buccaneers. Jones saw an inconsistent role during his first four seasons in the NFL; he had more than 1,000 yards from scrimmage in both 2019 and 2020, but he was limited to only 492 yards from scrimmage in 2021 while playing second fiddle to Leonard Fournette.