Amari Cooper is heading to Cleveland. The Browns are trading for the Cowboys wide receiver, reports NFL Network’s Ian Rapoport (via Twitter). 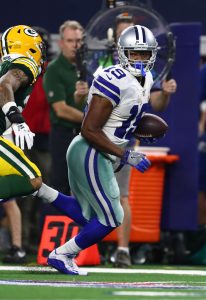 According to ESPN’s Adam Schefter (on Twitter), Cleveland is trading 2022 fifth- and sixth-round picks to Dallas for Cooper and a sixth-round pick. Josina Anderson was first with the news (on Twitter) that the two teams were zeroing in on a trade. This move clears $16MM in cap space for the Cowboys while arming the Browns with a Pro Bowl receiver in his prime.

The Jaguars, Dolphins and Jets also pursued Cooper, according to CBS Sports’ Jonathan Jones. Given the modest return the Cowboys are collecting, the other AFC teams’ offers did not appear to impress Dallas. Had the Cowboys cut Cooper, ESPN.com’s Dianna Russini adds he was not expected to garner a similar contract on the open market (Twitter link). This ends a four-season partnership between Cooper and the Cowboys, who traded their 2019 first-round pick to acquire the ex-Raider ahead of the 2018 deadline.

Cooper landed on the trade block this time because of his contract, which calls for $20MM base salaries from 2022-24. That said, none of that money is guaranteed for the Browns, making this a similar arrangement to their previous big-ticket wide receiver trade.

Wideout did not reside especially highly among the Browns’ needs for a bit, but the team could not establish a fit with Odell Beckham Jr., leading to a messy separation. Cleveland’s latest marquee wide receiver trade has proven far less costly. It cost the team a first-round pick and Jabrill Peppers to acquire Beckham in 2019, and the Giants had recently given Beckham a monster extension. The Cowboys handed Cooper a five-year, $100MM deal in 2020 but made it known this week they were planning to move on from him, limiting the compensation.

Despite having been in the NFL since 2015, Cooper is still just 27. His high salary aside, the former Alabama target will be a welcome addition for a Browns team leaning toward — per the bulk of this offseason’s reports — giving Baker Mayfield another opportunity. (That said, the Browns have also been linked to Derek Carr, which is now a bit more interesting with Cooper in the fold.) The Browns ended their season thin at receiver, and Jarvis Landry is not a lock to return. Landry, 29, has fallen off his Pro Bowl pace in recent years, though he did aid the Browns’ playoff push after Beckham’s 2020 ACL tear.

Cooper provided vital assistance to Dak Prescott, with the Cowboys turning their 2018 season around after his midseason arrival. The former No. 5 overall pick is one of the NFL’s best route runners. He topped 1,100 yards in both 2019 and ’20, doing so in the latter year despite Prescott’s early-season injury. Overall, Cooper is 5-for-7 in 1,000-yard seasons. His presence freed up opportunities for CeeDee Lamb and Dalton Schultz last season, but Dallas will go with its cheaper cogs moving forward. The team is also trying to lock down Michael Gallup to a lower-cost extension.

57 comments on “Browns To Acquire WR Amari Cooper From Cowboys”