One day after a visit with the Patriots, Leonard Fournette has decided to stay in Tampa Bay. The Buccaneers are re-signing the running back to a three-year, $21MM deal (Twitter link via NFL Network’s Ian Rapoport). He adds that the contract has a maximum value of $24MM. 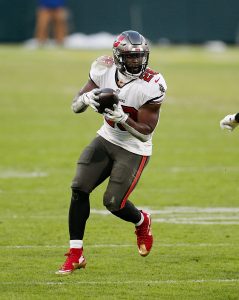 An ESPN report further details that the deal includes $9MM in guaranteed money. Fournette, 27, has spent the past two years in Tampa Bay after his time in Jacksonville came to an end. He was clearly willing to test the open market, given his visit in New England, but a return to the Buccaneers – especially given the unretirement of Tom Brady – was the most logical move in the eyes of many.

Fournette didn’t have the bell-cow type of workload he was used to as a Jaguar during his early days with the Buccaneers. However, he took over the starting role from Ronald Jones in 2021, and seized the opportunity. The former fourth overall pick averaged a career-high 4.5 yards per carry, and ranked sixth in the league amongst RBs with 1,266 scrimmage yards.

Keeping Fournette was also likely a necessary move, given the state of Tampa’s depth chart at the position. The aforementioned Jones, along with Giovani Bernard, are both unrestricted free agents, so this signing fills a roster hole. Along with the extension of receiver Chris Godwin, it also marks another sign of continuity in the Bucs’ offense, which – to much more of an extent than many thought – will look very similar in 2022 to what it has in the past two seasons.