On Wednesday, the Jaguars announced the signing of Arden Key. The defensive end will receive a one-year deal that could be worth up to $7MM (Twitter link via NFL.com’s Mike Garafolo). 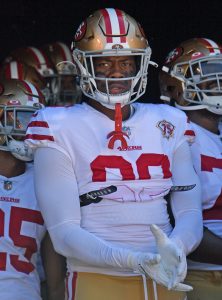 Key has always been viewed as an elite talent, dating back to his college days. Once considered a first-round prospect, Key fell to the Raiders in the third round of the 2018 draft. He didn’t shine with his original team, but he seemed to put it all together with the 49ers in his platform year. After notching 6.5 sacks and 17 quarterback hits, his career year led to a strong free agent market.

The Lions, Ravens, and Chiefs all looked into Key, but the Jaguars seem to have come away with the winning bid. The Niners, meanwhile, will be leaning more on Kerry Hyder for quarterback pressure.

The Jaguars could still look to add more pass rushers in the draft, but Key figures to be an important part of the edge rotation no matter what. It’s a huge step up for Key, who looked to be trending in the wrong direction as recently as 2020. In that year with the Raiders, Key played on roughly 40% of the defensive snaps but couldn’t manage a single sack.

It’s worth noting that another strong season could position Key for a much larger payday next year, especially since he won’t turn 26 until May.