One of Robert Saleh‘s 49ers charges will reunite with him in New York. After playing a season with the Raiders, Solomon Thomas is signing with the Jets, Brian Costello of the New York Post tweets. It’s a one-year deal, Adam Schefter of ESPN.com tweets. 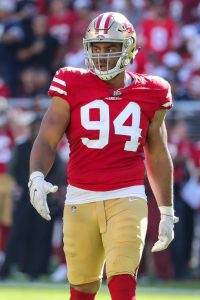 A former top-three pick, Thomas spent the first four seasons of his career playing in Saleh’s defense in San Francisco. The inside pass rusher will join a Jets defensive line housing Quinnen Williams and Sheldon Rankins at the D-tackle spots. Thomas will join recent signee D.J. Reed as ex-49er defenders to rejoin Saleh in New York this offseason.

While Thomas has not come especially close to living up to that No. 3 overall draft slot, the Stanford product has been a capable rotation player. Working initially as a defensive end who moved inside frequently, Thomas has 9.5 career sacks. After suffering a torn ACL in a Week 2 game against the Jets in 2020, Thomas signed a one-year deal worth $3.25MM to join the Raiders. He registered 3.5 sacks with Las Vegas last season and forced two fumbles in his D-tackle role. Both were career-high marks for the five-year veteran.

The Jets guaranteed part of Rankins’ 2022 salary this month and picked up Williams’ fifth-year option. Thomas’ history with Saleh certainly points to him playing a key role. Thomas, 26, played 48% of the Raiders’ defensive snaps last season and, despite coming off the ACL tear, did not miss a game.