Browns center J.C. Tretter profiles as a potential cap casualty, given that his release would save the team $8.2MM against the cap while incurring a modest $1.6MM dead money charge. Cleveland GM Andrew Berry recently addressed Tretter’s status, and he stopped short of confirming Tretter will be back in 2022, the final year of his current contract. 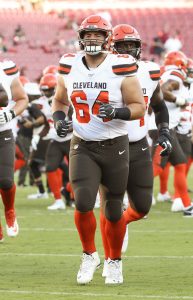 “For all of these situations on our roster, we work through them over the next couple weeks,” Berry said (via Marla Ridenour of the Akron Beacon Journal). “J.C.’s been a real productive veteran for us, he’s been a starter since 2017 for us and played a lot of really good football, we expect him to continue to play some really good football.”

Tretter, 31, has dealt with ankle and knee injuries over the past three seasons, but he has missed just one game since joining the Browns in 2017 (which came in Week 16 of the 2021 season and which was due to a positive COVID-19 test). Although he has never made a Pro Bowl, Pro Football Focus’ advanced metrics have consistently rated him as a high-end starter, with a grade no lower than 72.0 since 2018. And with the Browns angling for a postseason berth in 2022, a quality veteran on a reasonable salary at the pivot is a nice luxury for Berry to have.

That is especially true when considering that RT Jack Conklin, who recently restructured his deal, missed 10 games in 2021 due to a variety of injuries, including a torn patellar tendon. Berry said that Conklin is “doing well” in his recovery, but in light of the play-time incentives included in the reworked contract, it seems as if there is at least a chance that Conklin will miss game action in 2022.

If that happens, though, the Browns do not plan to shift LT Jedrick Wills to the right side. Wills had some injury issues of his own in 2021 and did not play particularly well in his 13 contests, but he is going to stay right where he is, despite his RT experience in high school and college.

“No, Jed will stay at left tackle,” Berry said. “We feel good about the depth that we have at the tackle position.”

Berry did leave open the possibility of supplementing that depth. Swingman Chris Hubbard, who played in just one game in 2021 due to a triceps injury, is eligible for free agency, and as a result of the health issues experienced by Hubbard, Wills, and Conklin, 2021 fourth-rounder James Hudson and former Jets taxi squad member Blake Hance were forced into significant action.

On the plus side, 2020 fifth-rounder Nick Harris played well in Tretter’s absence last year. If Berry were to move on from Tretter, that would suggest that he has considerable faith in Harris.

In related news, head coach Kevin Stefanski will continue calling the team’s offensive plays, per Mary Kay Cabot of Cleveland.com (via Twitter). This is despite the fact that Alex Van Pelt no longer has to pull double-duty as offensive coordinator and QB coach.