The Panthers are keeping one of the key pieces to their offense around for the foreseeable future. Wide receiver DJ Moore has signed an extension, the team announced. 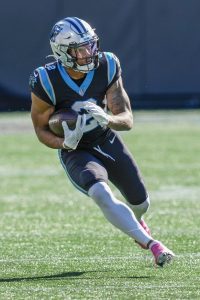 Moore was set to play on the fifth-year option of his rookie contract. As ESPN’s Adam Schefter reports (on Twitter), the contract includes three years and $61.884MM in new money. He adds that $41.61MM is guaranteed. As a result of this extension, he is on the books for the next four years at a total of $73MM.

Moore was the top receiver taken in the 2018 Draft, when Carolina selected him 24th overall. He produced 55 catches for 788 yards and two touchdowns in his rookie season. In the three years after that, he has recorded no fewer than 1,157 yards, (something only Stefon Diggs has also done during that span) operating as the most consistent pass-catching option in the team’s offense. He has 301 receptions and 14 touchdowns in his career. The fact that he was the Panthers’ Walter Payton Man of the Year finalist in 2021 would have only helped the team’s perception of him, and their willingness to make such a commitment.

The 24-year-old was set to earn $11.1MM on the option, but this extension certainly represents a raise. At an average of just over $20.6MM, the new deal will make Moore the sixth wideout to eclipse the $20MM-per-season plateau. The extended stay in Charlotte will also give him an opportunity to continue climbing the franchise ranks in terms of catches (where he sits sixth) and yards (fourth).