Not long after reports of extension talks surfaced, Maxx Crosby will see a big raise. The Raiders locked down their Pro Bowl pass rusher Friday, Tom Pelissero and Ian Rapoport of NFL.com report (on Twitter). The Raiders announced the extension agreement. 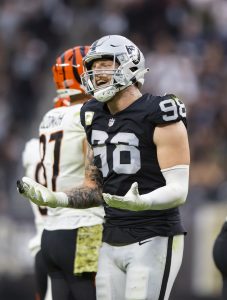 Crosby agreed to a four-year, $98.98MM extension; the deal includes $53MM guaranteed. This is a considerable development for a player who entered the NFL as a Day 3 pick from a mid-major program.

This contract bumps Crosby into the upper echelon of edge rushers. At nearly $25MM annually, the former fourth-round pick is now the league’s fourth-highest-paid defensive player. Crosby’s deal tops Aaron Donald‘s, with only T.J. Watt, Joey Bosa and Myles Garrett‘s contracts coming in ahead of his.

This is obviously a major commitment from the Raiders, who saw Crosby quickly usurp draft classmate Clelin Ferrell as their cornerstone defensive lineman. An Eastern Michigan product, Crosby is just 24 and already has 25 sacks on his resume. He played a big part of Las Vegas clinching a playoff berth in Week 18, dominating against the Chargers to cement the team’s first postseason appearance in five years.

Crosby’s extension agreement ties him to the Raiders through the 2026 season. The Raiders are transitioning to a new regime, with Patrick Graham set to take over the defense. Friday’s contract terms certainly illustrate the Dave Ziegler–Josh McDaniels duo’s faith in Crosby, acquired in Jon Gruden‘s second draft running the Raiders. The team still has Yannick Ngakoue under contract for one more season, while Ferrell and Carl Nassib are also signed through 2022.