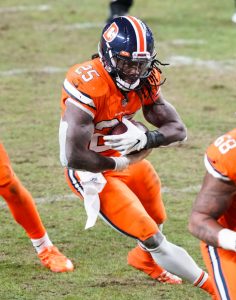 Earlier this evening, Mike Klis of 9News in Denver reported (on Twitter) that the Broncos were “in discussions” about bringing back the veteran running back for another season. Ryan O’Halloran of The Denver Post was first to tweet that the two sides were discussing a new one-year deal. Per Klis (on Twitter), the deal is worth $2.5MM, with Gordon having the chance to earn up to $4MM.

As Troy Renck of Denver7 tweets, Broncos GM George Paton has kept an open dialogue with the veteran RB throughout the offseason, and new head coach Nathaniel Hackett has also shown interest in having a pair of trusted running backs on his roster. Now, the Broncos can roll forward with their successful 2021 tandem, with Gordon joining 2021 second-rounder Javonte Williams in Denver’s backfield.

Following five years with the Chargers, Gordon inked a two-year, $16MM deal with the Broncos in 2020. The 29-year-old couldn’t expect as much this time around; a report from earlier this offseason indicated that the RB could expect a one-year, $2.5MM deal. The veteran eventually changed agents, going from Fletcher Smith and Damarius Bilbo to Brian Murphy and Joe Panos of Athletes First, and the move apparently garnered him some extra cash.

Gordon stood as one of the best free agent RBs remaining on the market, especially since he’s posted more than 1,100 all-purpose yards in each of his last two seasons. He’s also scored exactly ten touchdowns in each of those Broncos campaigns. Gordon also generated interest from the Ravens before landing back in Denver.