The Lions are looking into possibilities to fill a position of need, bringing in Georgia linebacker Quay Walker yesterday for a visit, according to Ian Rapoport of NFL Network. The question of importance, though, is: will he still be there at the end of the first round? 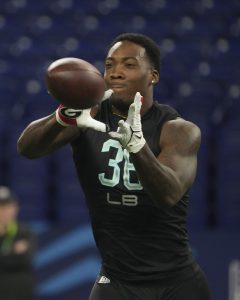 Detroit holds the No. 2 overall pick, but will have to use it on one of the 2022 NFL Draft’s top talents. They will have their pick of whoever is left out of Aidan Hutchinson, Travon Walker, Evan Neal, and Ikem Ekwonu, among others. They do have a second first-round pick, with the Matthew Stafford–Jared Goff trade giving them the Super Bowl-winning Rams’ 32nd overall pick.

After seeing Jalen Reeves-Maybin depart in free agency last month, the Lions certainly have a hole to fill at linebacker. They do return contributors in Alex Anzalone and Josh Woods. They also brought back Jarrad Davis after he spent a year with the Jets. Walker would fill an important role in the middle that could help solidify Detroit’s front seven.

Walker is seen by many as the third-best linebacker prospect in the Draft behind Utah’s Devin Lloyd and teammate Nakobe Dean. In the rankings provided by Dane Brugler of The Athletic, Walker slots in as the 31st overall prospect, with Dean at 29th and Lloyd at 9th.

Brugler certainly lines it up to be a close call in determining if Walker will make it to Detroit at 32, but it largely depends on when the first linebackers get taken. If Lloyd finds himself in the top ten picks, a run could ensue with linebacker-hungry teams jumping from their seats to select one of the Bulldogs. If no linebackers are drafted till the middle of the round, the Lions might find themselves lucking into a solid new starter in the middle.