The Giants have become the latest team to make their decisions with respect to 2019 first rounders. Not surprisingly, they declined to pick up the fifth-year option on quarterback Daniel Jones (Twitter link via NFL Network’s Judy Battista). 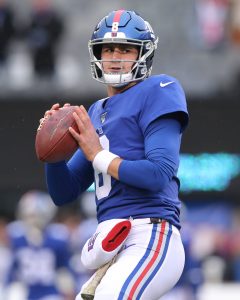 Jones, the sixth overall pick and second QB off the board that year, has failed to live up to expectations so far in his career. He has started all but one game during his three years with the team, compiling a 12-25 record. His completion percentage (62.8% overall) and yards per attempt average (6.6) have remained consistent throughout his tenure, representing an underwhelming level of development in his passing ability. That, coupled with a combined 49 turnovers (29 interceptions and 20 lost fumbles) make this the expected move.

Picking up the option would have given Jones a guaranteed 2023 salary of $22.4MM. Instead, he will now enter the 2022 campaign knowing his future with the team will be exclusively tied to his level of play under new head coach Brian Daboll. Ownership has publicly backed the Duke alum as the starter of the immediate future, so this news shouldn’t have an effect on the team’s draft plans.

Meanwhile, the Giants announced that they did exercise the option on defensive linemen Dexter Lawrence. He becomes the fifth player at that position to be retained through 2023 via the option. Without a Pro Bowl to his name, he will earn $10.753MM that season. The 24-year-old has started 41 of 48 career games, putting up solid, if unspectacular, numbers. Overall, he has totalled 145 tackles and nine sacks across his three seasons in the league.

As the Giants head towards a 2022 campaign in which significant improvement is expected, they now have a bit more certainty with respect to 2023 as well.