Some brake-pumping appears necessary regarding a Kadarius Toney trade. The Giants’ new regime has discussed the 2021 first-round pick with teams, but SNY’s Ralph Vacchiano tweets the team is merely listening to offers rather than shopping the young wide receiver. 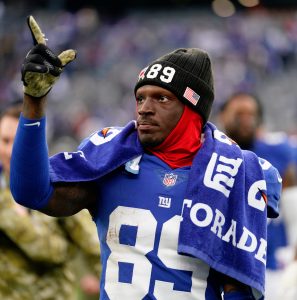 The Giants are open to dealing Toney, who flashed when available as a rookie. But last year’s No. 20 overall pick missed extensive game and practice time and did not impress the team with his work habits. New York’s Joe Schoen–Brian Daboll regime still views the Florida alum as a key piece on offense, with Jordan Raanan of ESPN.com indicating the Giants want “significant” compensation for Toney (Twitter link).

Nothing is imminent here, with Albert Breer of SI.com noting the new Big Blue power brokers do not seem motivated to unload Toney. Instead, they want to see how an offense featuring he and Saquon Barkley looks. This was a rare sight last season, which featured both Barkley and Toney suffering injuries. The duo only played four games together in 2021.

While teams may be calling on the receiver, nothing has “come close to materializing in terms of a trade,” per NFL Network’s Mike Garafolo (via NFL.com). While Vacchiano’s report indicates that the Giants are the ones who are receiving the calls, Garafolo says it’s “unclear” if the Giants initiated any trade talks. Ultimately, the reporter says it “doesn’t seem very likely” that Toney is moved any time soon.

Toney attended the start of the Giants’ offseason program Monday, and a report surfaced earlier today indicating the team is shopping Darius Slayton, who is going into a contract year. The former fifth-round pick has displayed a larger body of work, but Toney — should he manage to stay on the field — looks to have more upside. While it is noteworthy the shifty ex-Gator even landed in trade rumors, Daboll likely wants to see how the second-year receiver looks in his offense before a move transpires.